November was pretty uneventful, so here's November and December in one post. 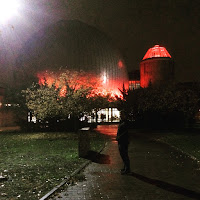 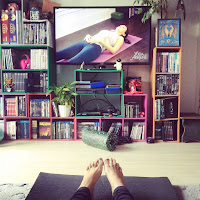 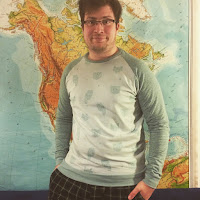 ~ The Berlin Planetarium reopened after renovations and we went to see the music show Queen Heaven, a multimedial lasershow created by Brian May in 2001. Really weird show, but the planetarium is definitely worth a visit!
~ Let's do Yoga! Started with the 30 days of Yoga with Adriene, haven't quite finished yet...
~ I went to my first ever sewing class hosted by the lovely Anne from Partywoods. We made a raglan style sweater from scratch, including constructing the pattern. Blogpost coming soon! 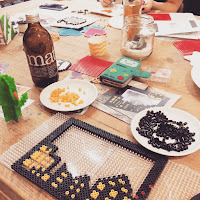 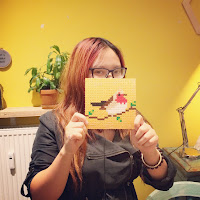 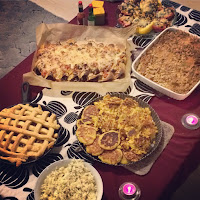 ~ Hosted my second ever workshop just a few weeks after my first one at Dawanda's Long Night of DIY. Since we had so many melting beads left over I asked if I could do a round two at the Snuggery. The night did not start well though. I left work early so I could prepare the Snuggery, but Obama crossed my plans by paralyzing the public transport during his Berlin visit. It took me 1 1/2 hours instead one 1/2 an hour which made me late for my own workshop. But I wasn't the only one who got obstructed by traffic, pretty much everyone else was late as well and due to a flu epidemic we ended up with only 9 people including me and Annika from Dawanda, but it was really nice and cozy this way. The exact opposite of my previous workshop!
I ended up making a Batman style picture frame. And my friend Minh from Studio S3nnobara made this cute Pixelbird which is going to be one side of a handbag actually.
~ Thanksgiving! Each year we celebrate with a feast to feed an army ;) It was only the two of us this year, so we had lots of leftovers for the next days. 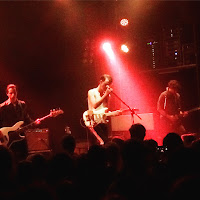 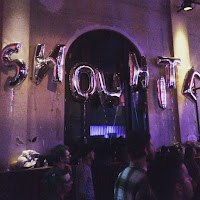 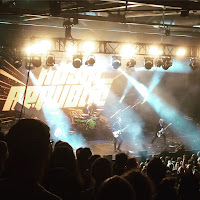 ~ Got to see Drangsal again. He is definitely one of my top artists of 2016! Too bad the show was pretty short. If I had paid for the ticket I would have been a little dissapointed. 4/5 Bazooka Points
~ On the same night I attended the 7 year birthday bash of the Snowhite music label. I actually started my music biz career with Snowhite 7 years ago, I was their first intern!
~ The first time I saw Royal Republic live was at an acoustic showcase at work, so this concert was a whole other world. They rocked pretty hard! 5/5 Bazooka Points for a definitely must see live performance. 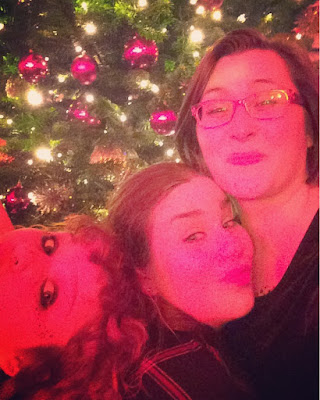 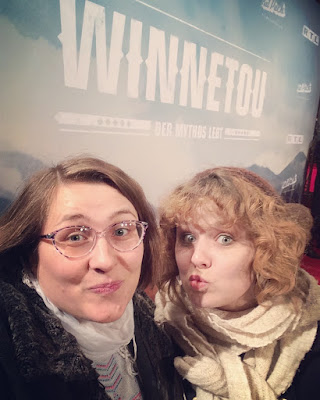 ~ Drunken fun at our annual office christmas party! It was themed Spacestation X-Mas and I got to take out my handsewn Star Wars skirt again.
~ More work fun at the movie premiere for the Winnetou tv trilogy. We distributed the soundtrack to the films, so we got invited to mingle with the cast and crew and some german f-list celebrities to watch the first movie on the big screen. 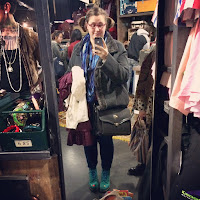 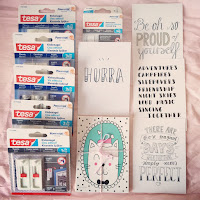 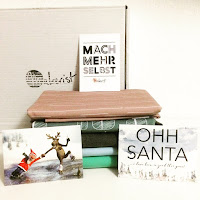 ~ Went to the re-opening of Colours Second Hand store, which is now a Pick'n'Weight Vintag store. They have a massive selction of vintage clothing in the front which is set with insane Kilo prices, but they also have a set price section in the back which also has a ton of vintage items at a reasonable price. I found two pieces of clothing that day, a silk blouse and a dress in the "low end" section, which is 1€ a piece. Score!
~ Won a package of adhesive nails and screws in Luloveshandmade's Give Away, she also added some of her awesome handlettering prints <3~ Speaking of winning stuff. I also took part in Kathastrophal's DIYyoucloset Give Away with my Star Wars Skirt and won a fabric package and an online sewing class from Makerist. 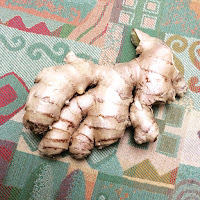 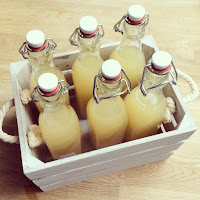 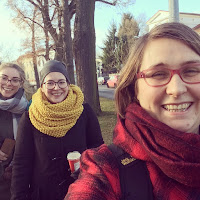 ~ Time for homemade christmas presents! I teamed up with Anne from Partywoods to make our very own Ginger beer as a present for our husbands. It turned out delicious, maybe I'll write up a post for that later!
~ Spa Day with the Ladies <3 We went to the thermal spring spa in Bad Belzig and spent half a day soaking in hot pools and sweating in the sauna. A perfect start to the holidays! 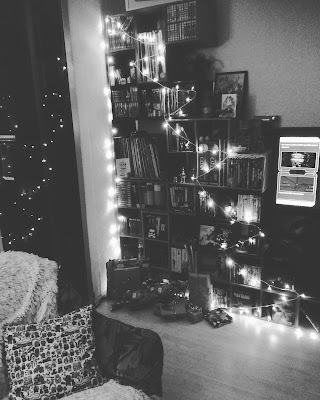 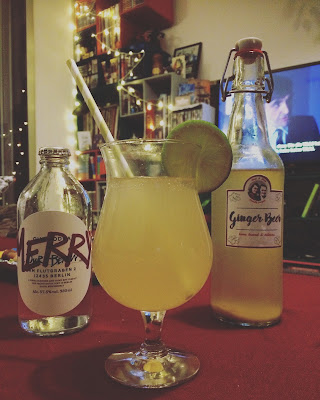 ~ Merry Christmas! Our alternative christmas tree this year was a chain of lights tree. I only made half a tree which reflected in the balcony window. Our other alternative tree's include the TP Christmas tree and this Pixel Christmas tree.
~ We tried out my homemade Ginger beer on Christmas Eve. Together with some vodka and limes it made a perfect Moscow Mule! 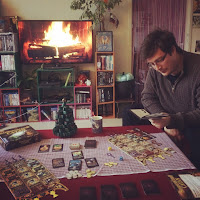 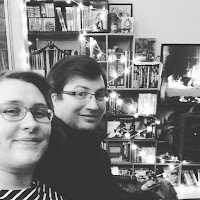 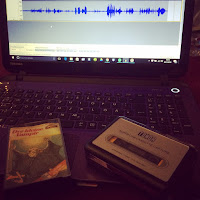 ~ Christmas time is boardgame time! We tried out the Starship Catan game I thrifted a while ago. It was pretty fun! Had the "fireplace" running all Christmas long, it gives such a nice atmosphere.
~ Waiting for the family to arrive. Everyone came to visit us this year, so we ended up not leaving the house for three days :D
~ On of my favorite presents from the husband: a cassette tape player and usb converter. Had to test it out immeadiately and converted some of my vintage The little Vampire audio book tapes. Now I can listen to them anywhere! 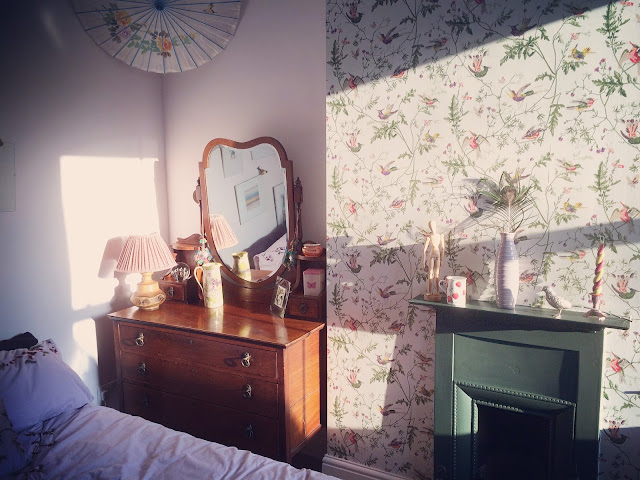 ~ We went on a Minication to Nottingham between Christmas and New Years. Check out this beautiful room provided by our Airbnb host. 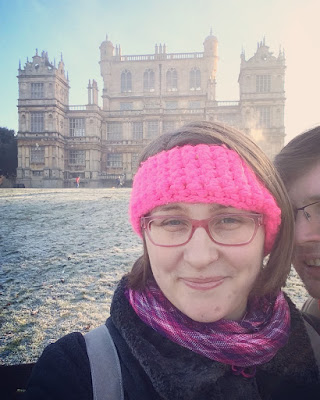 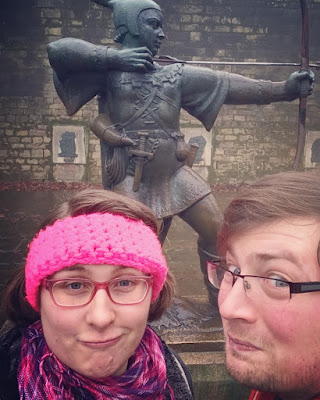 ~ Visited Batman's home on this sunny, but chilly December day. Wollaton Hall was filmed as Wayne Manor in The Dark Knight Rises. The husband likes to sneak into my selfies!
~When in Nottingham, you have to visit Robin Hood! 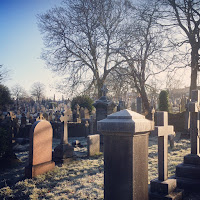 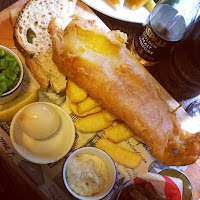 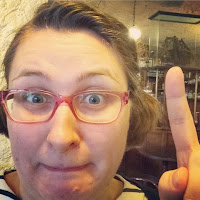 ~ Went to the beautiful Church Rock Cemetary for a walk among the graves. I have never seen so many gravestones in one place!
~ You gotta have some fish and chips when you're in Britain! I had them in the oldest pub of England, Ye olde Trip to Jerusalem.
~ They have a "Cursed Galleon" above the bar, which is supposed to have killed anyone who touched it! Scary, it was sitting right behind me the whole time... 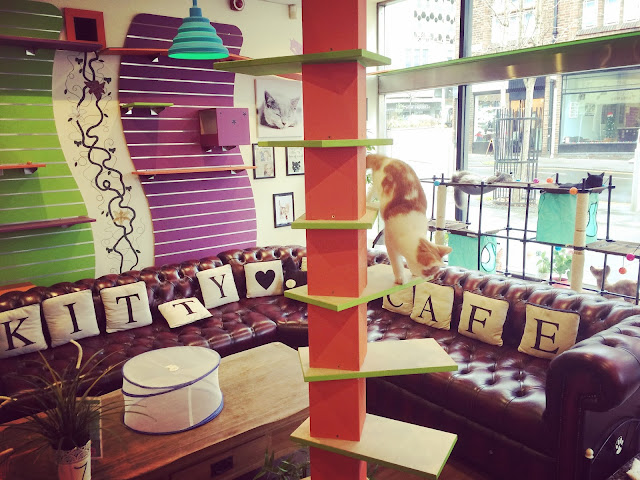 ~ Spent our last morning before flying back to Berlin at the local Kitty Cafe. I love cats so much, even though I'm allergic. Took an allergy pill right before we went inside and spent a lovely time petting some cute cats and drinking tea.
We got home on New Years Eve which we spent watching the Big Fat Quiz of the Year, just the two of us. I hope you all had a lovely New Years celebration and here's to a fantastic year 2017!
at 4:54 PM