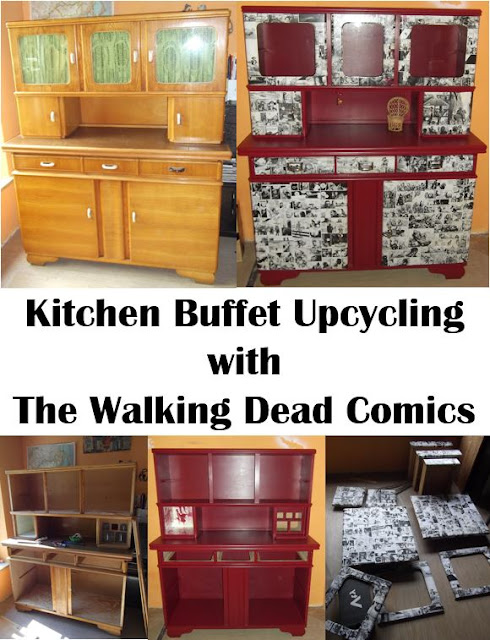 Oops, I did it again; I bought another kitchen buffet. Same store, even better price. I was bargaining so bad, it was almost embarrassing. After mentioning my birthday coming up, I got the super special deal of 40€. Without transport though, and I got a week to figure out how to get it home. Good thing I have awesome colleagues and one of them was nice enough to lend me her husband and car. There were some fearful occasions where we thought it was too big for the car, but it fit perfectly and got home to me safely.

Here's the beauty before its transformation: 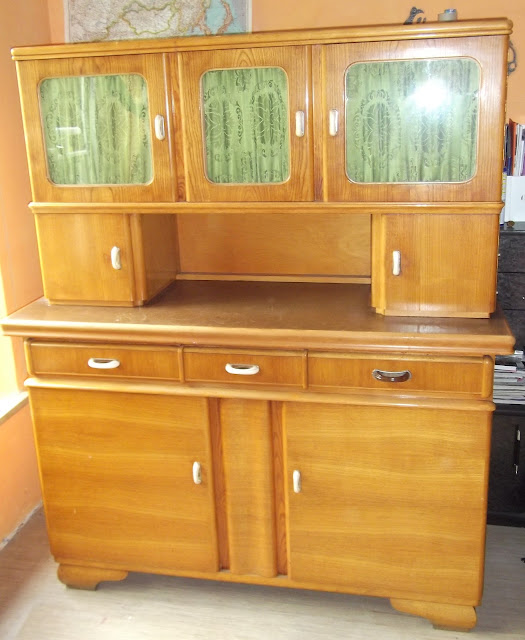 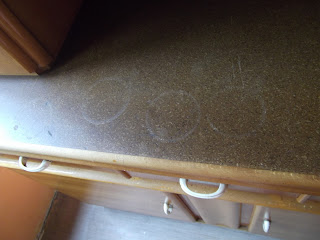 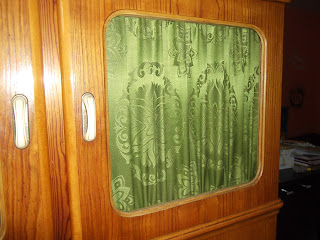 Some splotches of age, horrificly horrible curtains. But all in all, in very good shape. I love old furniture. It's so sturdy and non-swedish ;)
But of course there had to be a make-over. I bought the color before I had even bought the buffet. It's called crimson red. Lovely colour for a lovely piece of furniture. At first I was thinking about painting the whole thing and then splashing the "skeleton" with black. You know, just dipping the paintbrush into the color and throwing it at something. Looks amazing on our kitchen wall, but I wasn't sure about a piece of furniture. The splashes made me think of Dexter (amazing show bout a likable serial killer), which made me think of The Walking Dead (amazing comic and then show about the zombie apocalypse). After throwing around a few ideas in my head, mostly stencil-related, I knew what I wanted to do.

But see for yourself, the taking apart begins: 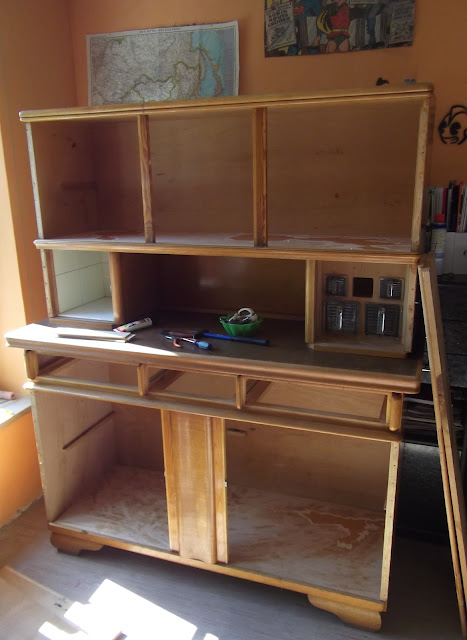 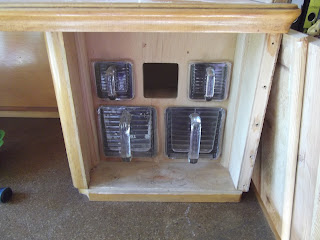 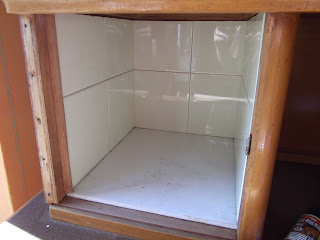 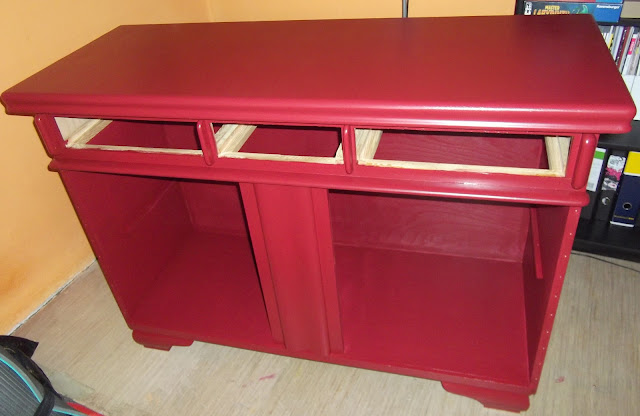 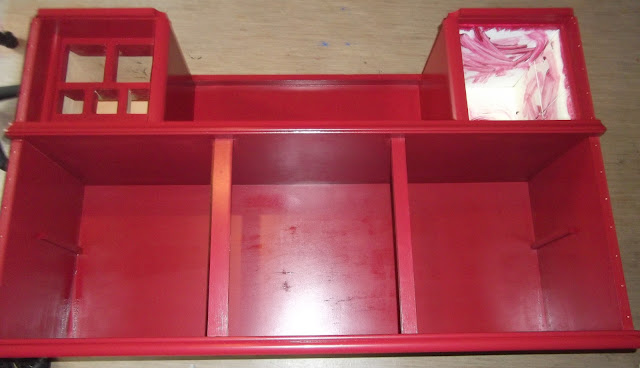 Having fun using the last bit of paint to horrify the tiles: 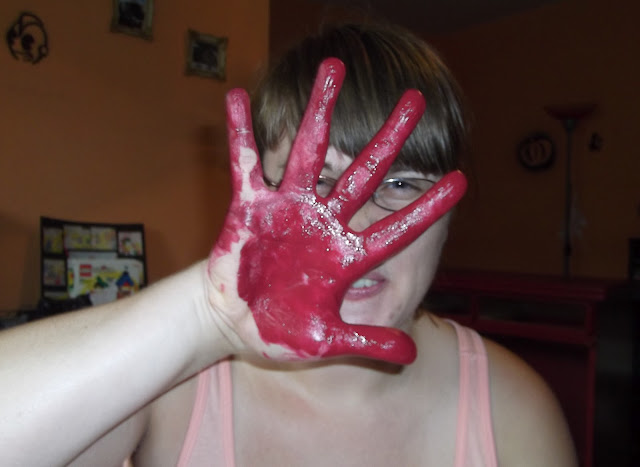 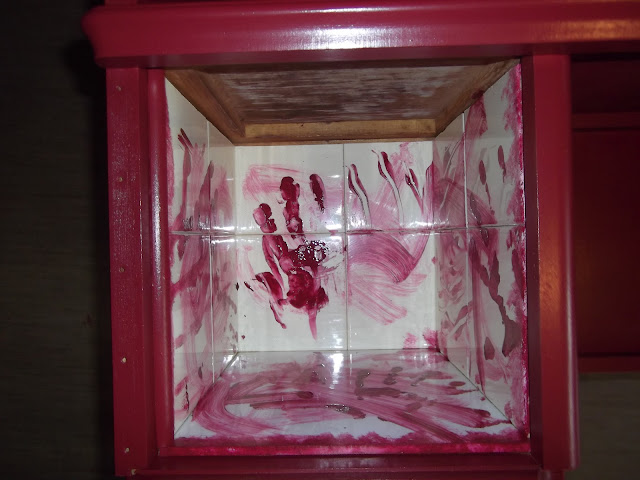 And here's the finished skeleton of the buffet. 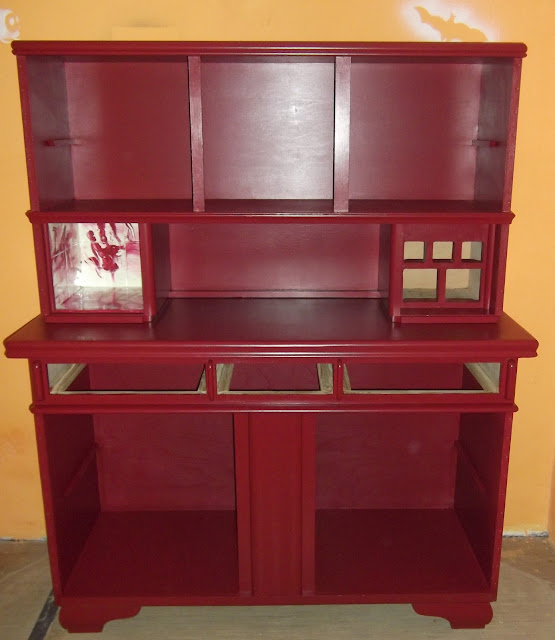 Now for the interesting bit. The doors were all supposed to be covered with comic strips from the "The Walking Dead" comics. Therefore, I searched the internet for comics and came out with a ton. Thus giving me enough choice to cover each door with its own personal storyline. The paper was cut into comicstrips containing one to three panels. They're glued to the wood with wallpaper paste. I mixed more wallpaper paste with the water than it said on the box, just to be sure it would stick.
Here's one of the smaller doors. 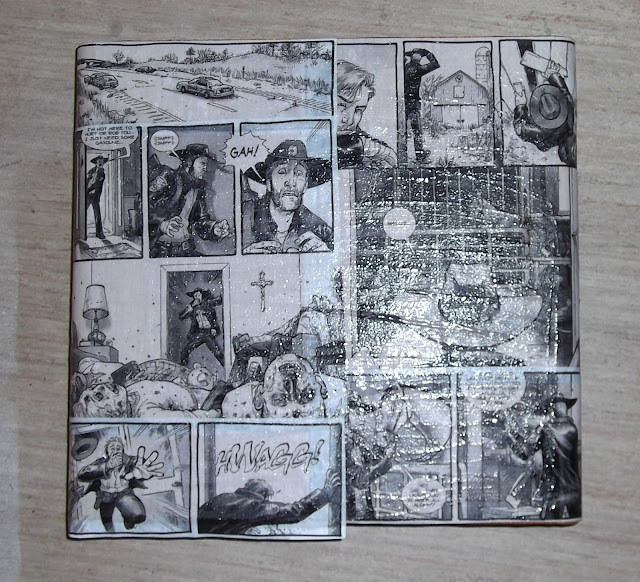 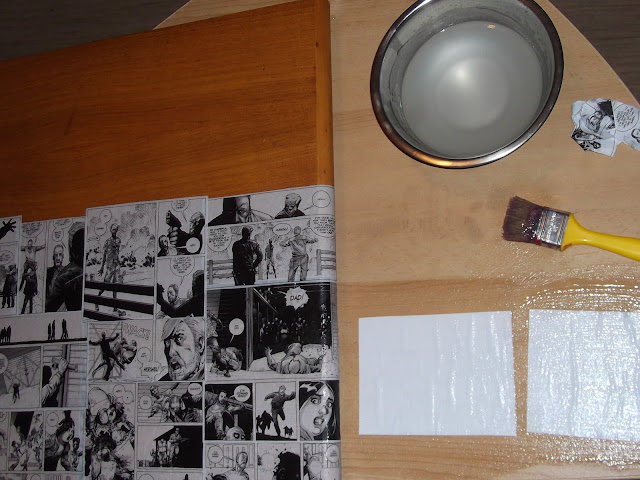 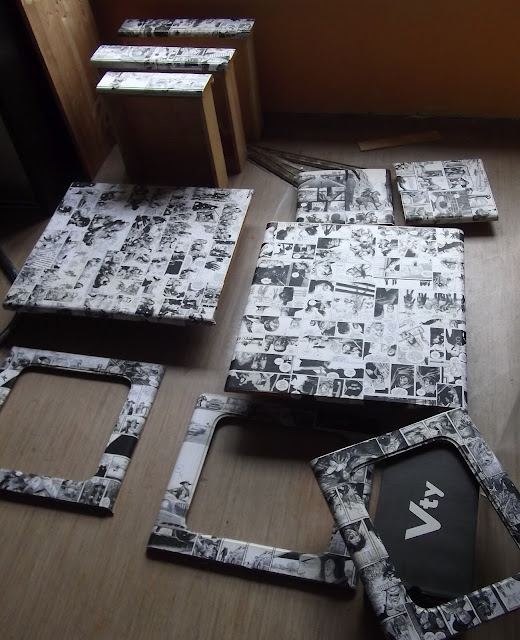 All done! Took me about 3 days to finish all of them, since I did it after work each day.I coated the doors 3 times with clear lacquer, the backs of the doors were painted with the crimson red and sadly I did this after applying the comics. You can tell in some areas..
But yeah, here's the finished product: 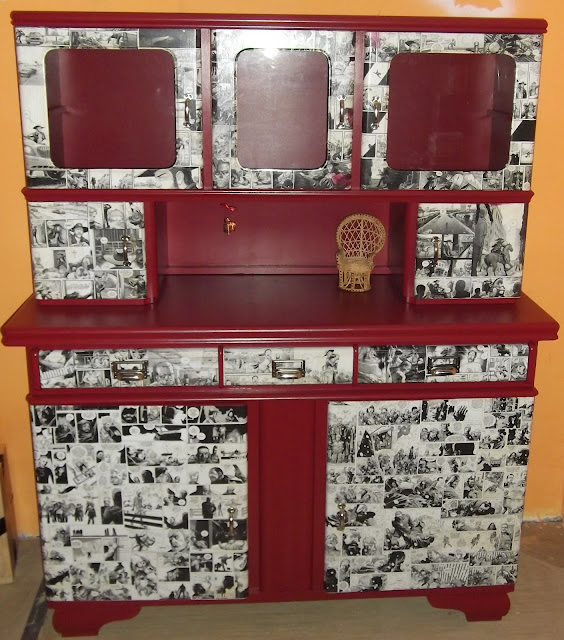 I got the Morticia chair at the same thrift store, just couldn't resist. Maybe I'll make a Morticia doll someday.. and the little Origami bat was a present from an old friend of mine. 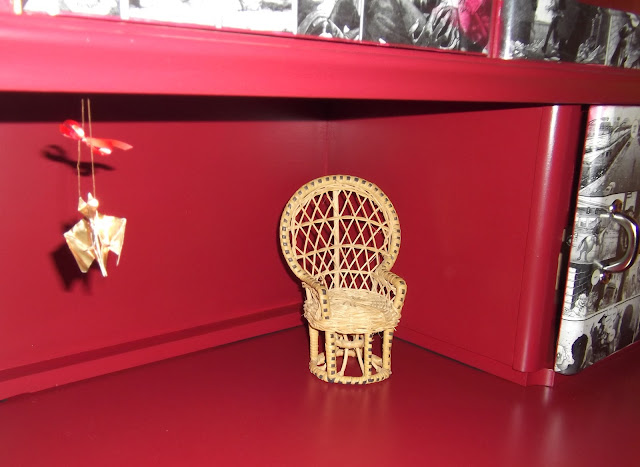 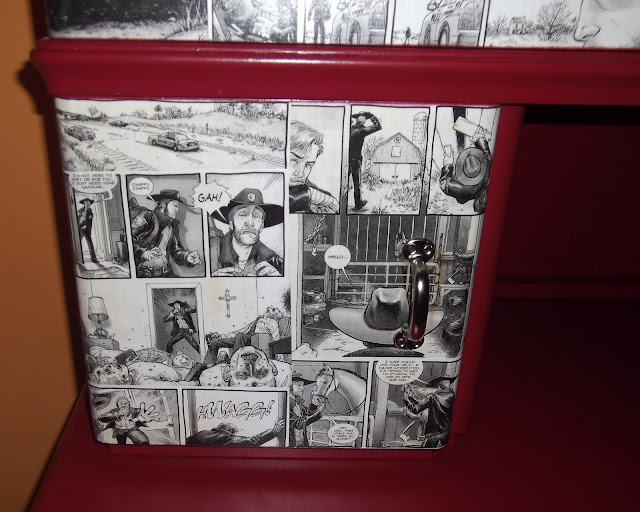 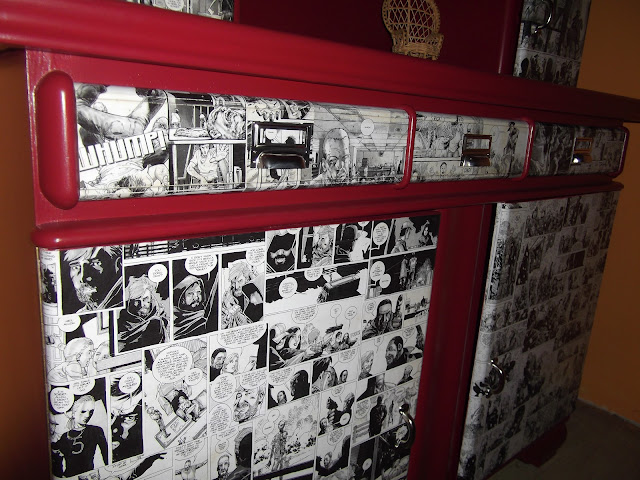 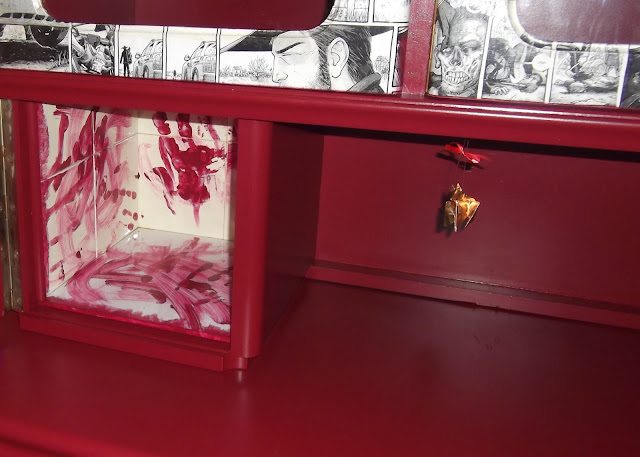 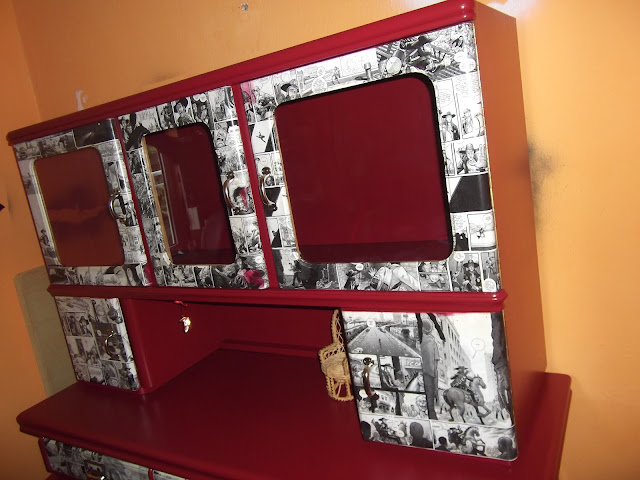 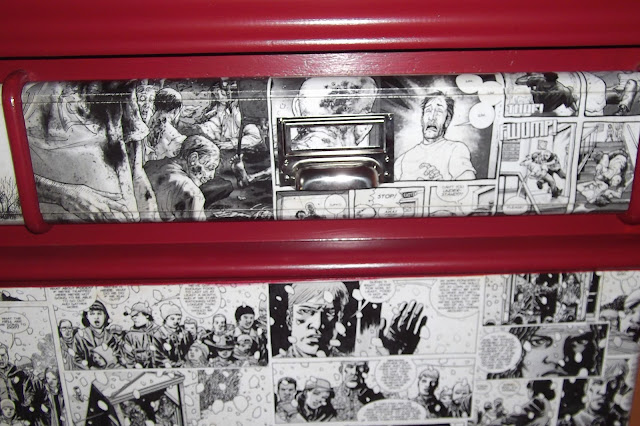 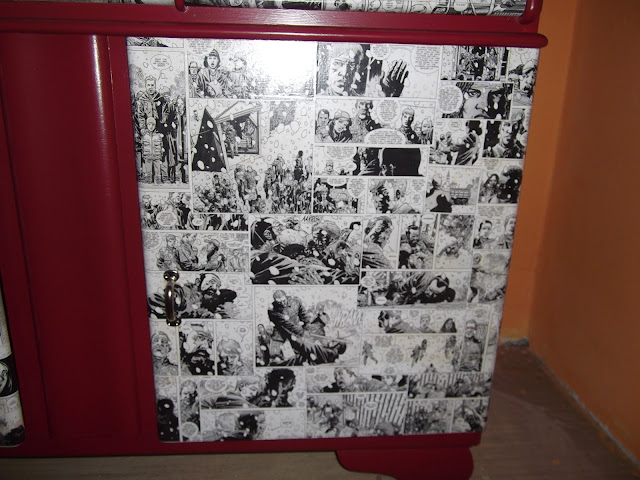 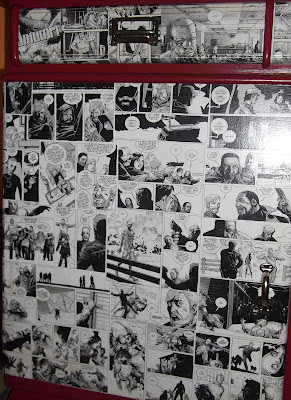 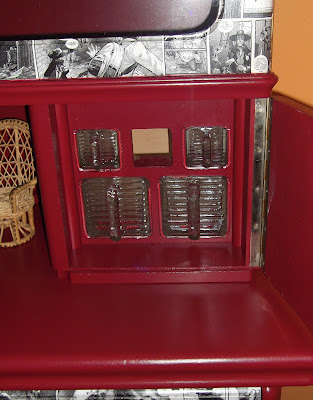 Here you can see why you should color the inside of the door first... 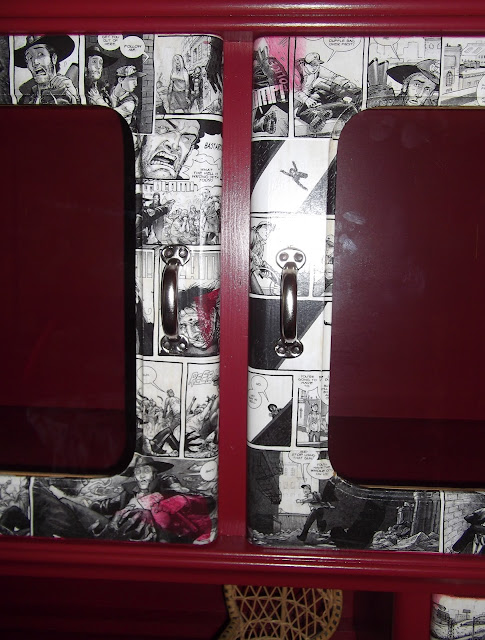 And in case you forgot how it looked before, because it blew your mind here's a before/after shot. 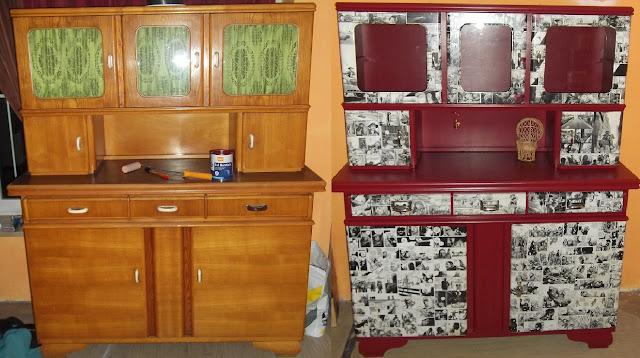 PS: Check out all these funky geeky crafts at the Nerd'n'Geek Linkparty <3
at 7:15 PM